A Different Kind of Hero 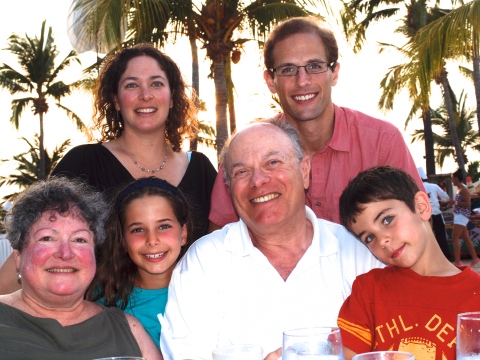 Gary and Sheila with the Berkenwalds

We recently lost my beloved father-in-law, Dr. Gary Romalis, z”l.  The following is a short tribute I delivered during the week of mourning.  For a more detailed article about Gary, see this article written by my wife’s cousin, Renee Ghert-Zand.

A Jewish teaching that is often quoted at funerals is from Pirkei Avot, a collection of wisdom passed down from teacher to student nearly 2,000 years ago.  Eizehu gibor.  “Who is a hero?” it asks.  And then it gives the answer one would not expect.  Instead of describing someone strong physically, it offers a different answer, a Jewish answer.  Eizehu gibor – “Who is a hero?”  Hakovesh et yitzro – “A hero is someone who can master his desires.”  Self-control.  That is the Jewish definition of heroism.

Gary was the other kind of hero – the kind who puts his own life at risk to save others.  He dedicated himself to protecting women, ensuring that they would always have control over their own bodies.  After being shot and nearly killed in his home while eating breakfast, Gary continued practicing medicine.  After being stabbed at work six years later, he persisted.  That kind of selflessness is heroic.

But there is much more to this hero.  My wife Dana often talks of the kind of father he was.  This hero, despite his long hours at the hospital, made his daughters his number one priority.  When he came home from work, there was nothing that could distract him from them.  Gary knew how to shut out all the distractions and be fully present.  When they were with him, they were the center of his world – and they knew it.  Whichever one was sitting on his lap, in that moment, was “his favorite.”

I did not know Gary then, but I can picture it because I have seen him as a grandparent.  This hero loved nothing more that to strip down to his underwear and give his grandchildren a bath.  Gary just wanted to be in their presence.

Gary was so proud of his children and grandchildren, and he let us know it constantly.  He gave love freely and unconditionally.  Whenever I shared a sermon, Gary was usually the first person to respond, always with “I love you and am so proud of you.”

As a father, it is Gary who I think about as my model for being Present with my children.  With all of the technology that modern life provides, it is so easy to be distracted from those we love.  Gary liked his technological toys, whether the latest iPhone or his GPS.  But it was always put away around his grandkids.  As a father, I think about Gary whenever I am tempted to look at my cell phone around my children.

Back when Dana and I were dating, we hit a bump at one point, and she broke up with me, leaving me pretty devastated.  I found myself back in the house with Gary, in the kitchen.  Without saying a word, he pulled me into a big hug.  He then told me, both of us with tears in our eyes, that he and Sheila would always love me and that I would always have a place in their home.  That was the most memorable hug of my life.

Several years ago, Dana developed a pregnancy complication that endangered her life.  It was exactly the kind of serious medical condition that Gary specialized in.  Of course, Gary was on the phone with friends and colleagues at San Francisco General Hospital.  Only the best would be allowed to care for his daughter.

When she went in for surgery, Gary was with me in the hospital.  After the initial procedure, a nurse came up to report that Dana had developed complications in surgery.  I remember it vividly.  We were in the hallway.  I became faint, and had to sit down on the floor against the wall.  I can only imagine what he was feeling on the inside, but Gary’s external calmness was so reassuring.

A little while later, Dana was in the surgery recovery room, where visitors are normally not allowed.  That wasn’t going to keep us away.  I will always remember what he told me.  “Walk in like you own the place.”  And we did.  Thank God, Dana recovered.  Gary and Sheila’s presence at that difficult time was so comforting.  I will be forever grateful.

As one of three men blessed to be married to “a Romalis girl,” I am eternally indebted to my father-in-law.

I will miss him deeply.  He was a hero.

4 thoughts on “A Different Kind of Hero”